Teachers should try something new every term. With the plethora of IT related products out there in the education industry now, this is not a difficult proposition.

This term I have been trying Classcraft.

Classcraft is a game that helps you establish and reinforce a positive classroom environment. You sign up your class. The students log in at take on a character in the game. Some are warriors, some are healers and some are mages.

My initial difficulty with Classcraft is my lack of knowledge of games. What is a Mage ? I didn’t know the value of experience points, activity points, health points and gold pieces but as usual, often your best resource to learn from is a student in your class. A couple of my students were hardcore gamers and they came to my rescue. I may even hand control of the game over to them at some stage.

You use the game to establish classroom routines and expectations initially. When students are in class ready to work before the bell they are given gold pieces or reward points in the game. This allows them to do different things like move up a level or earn rewards both game based and real life ones. These include the ability to change the appearance of their character in the game or to ask a question during a test. Some of the preset rewards in the game, such as “You can listen to music in class”, I deleted. 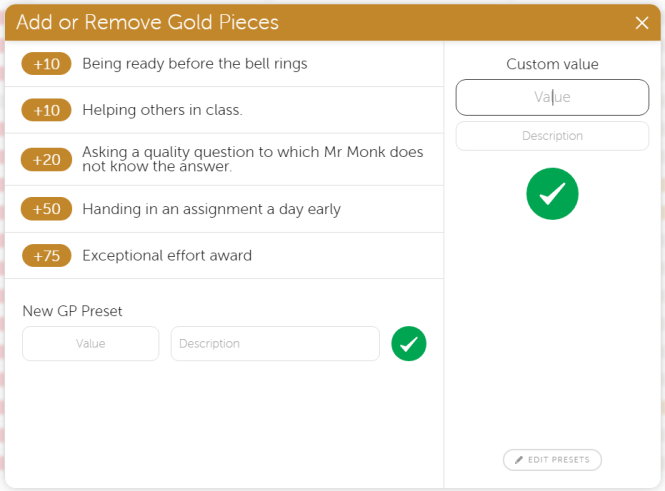 You can also be punitive and take health points away from students who do the wrong thing.

The behaviours lists, both positive and negative,  are completely customisable. One of my “pet peeves” is students packing up early. I added this one to my Remove HP list. I also added “Non charged netbook” for students who don’t have their computer charged to avoid the risk of falling over a chord. 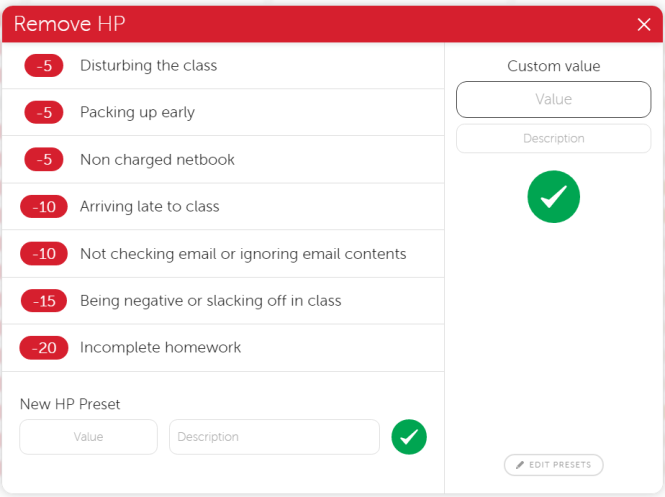 There is a great phone app so when you are teaching you can easily allocate points from your phone or from your computer.

Another feature that I use regularly is the impressively named “Wheel of Destiny”. It is just a random generator of student names but it is great for cold calling students. Students can see you are not picking on anyone and they know their name will be drawn at random eventually to answer a question. There is no escaping “The Wheel of Destiny”. Eventually a question is coming your way.

There are other features that I have not made much use of yet. The site has a built in class countdown timer for timed activities and a stopwatch.

You can start your lesson with a random Classcraft event that is sometimes funny and other times just lame. The other day a student had to sing a song for 20 gold pieces. One of her teammates took on the challenge when she refused. The team aspect of classcraft does appeal to students.

Classcraft also has a quiz module for class quizzes. It also looks like developing into a Learning Content Management System. You can put assignments and quizzes into class craft and make the results of these part of the game as well.

Here is where I begin to hesitate: So often in education I see IT applications developing what in the IT industry is known as “scope creep”. A system designed to do one thing well starts to try and do other things too. The scope of the applications creeps ever outwards.

We already use Moodle as our content management system and as our gradebook. We don’t want Classcraft doing that but we love the slick game like interface that Classcraft brings with it. Quizlet and Kahoot are amazing apps for quizzes. I want Classcraft to be able to use a quiz from Kahoot rather than have to write my own quiz in Classcraft. I want it to integrate with Moodle as well so I don’t have gradebooks in two places.

In Science we have searched for the GUT; the Grand Unified Theory. The theory of everything. The theory that unifies quantum mechanics and classical physics. In education we need the Grand Unified School Information Technology Solution (GUSITS); a school system that includes timetable, attendance, student behaviour management tracking, markbook, learning content management, reporting and assessment including quizzes and online testing, . The system would be online and open to students and parents 24/7. It would have built into it “gamification” elements just like Classcraft is doing. A school IT system that does everything? Such systems are developing. We use Sentral to do some of these things. Many Victorian schools use Compass. These systems lack any gamification elements at the moment and they fall short of the GUSITS we seek. The ultimate GUSITS would incorporate some gamificaton and these system designers could look at Classcraft and borrow some ideas from it.

There is great potential in Classcraft. The interface is slick. It is easy to use. The behaviour management aspect of the program is great. You are quickly and easily able to identify and reward positive behaviours for students. This explicit recognition and acknowledgment of positive classroom interactions has a powerful motivating effect on most students.

Reward systems only motive students if they are motivated by the reward. Some of my students are not motivated by the game at all. They could not care less about being able to change the appearance of their character or being able to ask me the answer to a question in a test but they still respond to being recognised for positive classroom contributions.

I would like to try Classcraft with a teacher who is struggling to maintain a positive classroom environment. I am the Assistant Principal who teaches one class a semester and students do tend to respond to positional authority. “They are very good in my class.” is something no teacher who is struggling with a student wants to hear. I would like to see if Classcraft would make a difference to the battling first or second year out teacher who has a challenging Year 8 class.

My other hesitation with Classcraft is the investment of time in playing the game. You do need to devote five or so minutes of class time a couple of times a week to it. Every minute counts in the classroom. Is this too much time out of the regular teaching and learning program? It could easily be argued that investing five minutes a lesson on establishing and maintaining a positive and engaging classroom environment is time well spent. It could also be argued that this is equivalent to four hours of instructional time lost over the course of a semester to playing a game. This time could have been better spent on covering the curriculum.

I will continue my trial and let you know how it goes after a full semester.

So many toys. So little time to play with them all.

2 thoughts on “Classcraft Review and the search for the GUSITS”